Login to My CAS Community

Did you ever wonder how Worman’s Mill got its name ¹; or how street names like “Bear Den”, “Mill Race”, “Palatine”, “Mill Island”, “Stoner’s Ford”, “Old Annapolis Trail”, and “Jacobs Garden” came to be? Worman’s Mill resident Heidi Sproat, a member of several historical societies, set out to answer those questions and in the process put together a narrative which attempts to trace the origins of our community. Here are Heidi’s findings described in detail. 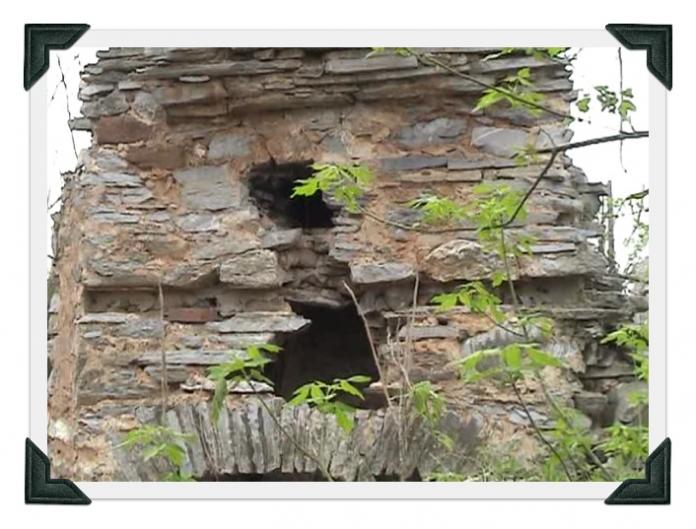 Jacob Stoner, a German settler to Frederick, MD built the Mill Pond House around 1746, before the Revolutionary War, on a site along the Old Annapolis Road. It was a prime example of half timber and wattle-and-daub construction typical of late medieval dwellings in the valley of the Upper Rhine in Germany. In fact, it was the only known house in the East German or Palatine style ever built in Maryland. The house was constructed entirely of peg and rail construction; there were no nails used.The house was built forty feet wide and thirty feet deep and had two stories. While the original house was constructed using a technique known as "waddle and daubing," the ground floor was made of both sandstone and limestone. Incredibly, there was a vaulted cellar and spiral stairs. The house resembled what we refer to today as English Tudor.

The Mill Pond House was situated on relatively flat, low rolling hills which permitted travelers to see ‘Stoner's Mill’ from a distance traveling along the road from Annapolis. Imagine carting your harvested grain to Stoner's Mill to have it ground into flour for the ensuing winter. Did you know that this old wagon trail road variously known as Old Annapolis Road, Monocacy Road, or the Historic Annapolis Trail runs in and near our development? There has been some suggestion that MD Route 194 running southwest from Taneytown to Frederick is the Old Monocacy Road, but that is still highly contested.

Some of Stoner's nearest neighbors owned land parcels called Mortality, Dear Bought, Bear Den, Rose Garden, Beaver Den, and Schifferstadt to name a few. Did you know that this area is a part of the original Tasker's Chance property of 7,000 acres patented to Benjamin Tasker in June 1727? [See early deeds to parcels on Tasker's Chance at pages 258-259.]

After Stoner’s death in 1767, the Mill Pond House was occupied by Andrew D. Worman for whom Worman's Mill was named. The Worman family purchased the mill in 1822 and it is recorded that in 1863, Robert E. Lee's confederate armies camped on the property during the Civil War.

Unfortunately, all that’s left standing of the original House are the chimney and some of its stone walls remarkably erect. Not surprisingly, all vestiges of the road are lost. The current location of the remains of the Mill Pond House can be found on the Worman’s Mill Conservancy property abutting Mill Race Road and the Tuscarora Creek.
A visitor today can only imagine a bygone era of life.

Did you know that the name of the surrounding Worman's Mill area and the Monocacy river came from a Shawnee name Monnockkessey? Translation of this Shawnee word is believed to be "river with many bends." Back in the early 1700’s, the Monocacy River was also called Cheneoowquoque by the Seneca Indians and Quattaro or Coturki by early white visitors to the region. The authors of the source book below counted no less than 34 different spellings of the word Monocacy. Other names include: Manockosy, Monoquesey, Monachasie, Manaquicy, Monocksey, Manakesen, Monksey, Monococy and Monocksesy.
References: 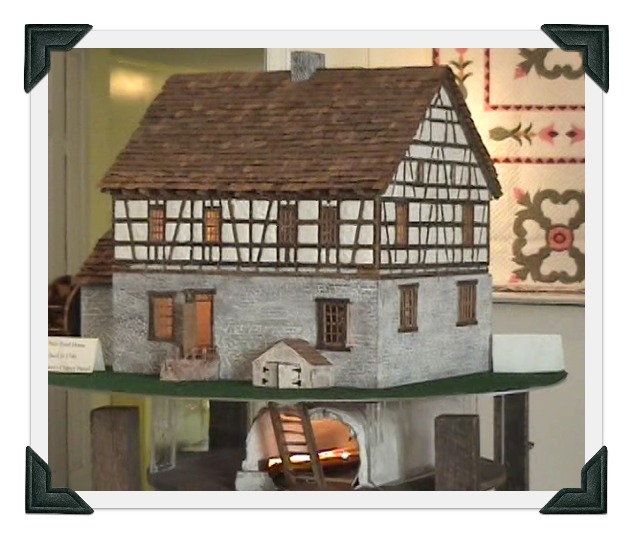 Jean Jones, widow of the former area resident, Claggett Jones, afforded Heidi the opportunity to browse through her husband's files on area history. In the late 1990s, over a period of about five years, Claggett, a tinkerer who loved to build things, built a replica of the1746 Mill Pond House. In concert with another resident Wes Stewart, also now deceased, the two men spent hours researching the Mill Pond House and constructed the replica. The article "Claggett Jones' memory lives on in house replica" in the Frederick News-Post of January 28, 2006 details this effort. Several years ago this replica was on display at a Public Meeting at Worman’s Mill Clubhouse.

Heidi was privileged to meet with an area resident who grew up on the very property we refer to today as Worman’s Mill. James (Jim) Walter Powell, Jr., who sadly passed away in March 2013, owned Powell Insurance Agency on Thomas Johnson Drive here in Frederick, Maryland for many years.

Born in 1926, Jim grew up on the 215 acre farm owned by landowner Ezra Houck. (See Atlas of Frederick County, Maryland, C.O. Titus & Co., 1873 map.) At a very young age, he came to live with his grandparents, Charles T. and Sarah Ann May Marshall, who occupied the farmhouse in the 1930s. Keep in mind that this was a time where there was no electricity, no in house water, or no bathrooms. His grandmother kept an expansive garden and his grandfather kept busy tending to cattle and other animals on the Houck property farm.

At this very young age, Jim came to be self-reliant and independent. These qualities served him well as for 111 days in the Second World War he was a Prisoner of War in Germany. Jim was interviewed in 2006 as part of the Veterans History Project and there is a copy of the interview available at the Frederick County Public Libraries. See also the American Ex-Prisoner of War medal. 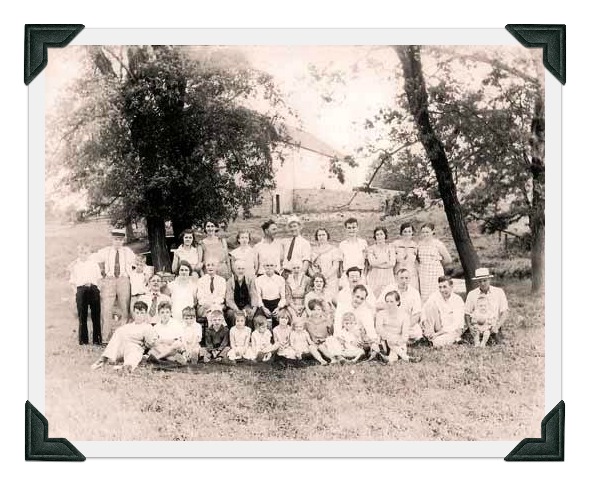 Jim was kind enough to let Heidi borrow two photographs. The first photograph was taken at the Houck farmhouse in early summer 1934 for a family reunion. From the left, Jim is the third young child in the front row. Note the farmhouse in the back of the group photo and the old automobile on the incline. Examining a Worman’s Mill map today, Jim attests to the house’s location as just a short distance from the Tuscarora Creek and east of the main bridge into the development. If a walker followed the trail over the Tuscarora Creek from the clubhouse area, one might see the remains of a stone house on the hill. The two individuals in the center 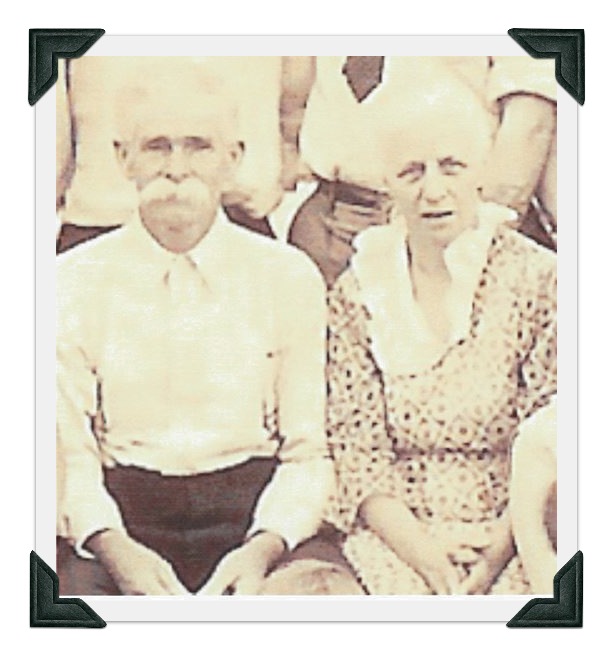 of the photograph are Jim’s grandparents, Sara May and her husband, Charles T. Marshall, in whose company he spent many of his early, formative years. One of Heidi’s favorite stories is how Jim would roller-skate alone from his parent’s home on West Patrick Street to his grandparent’s farmhouse at Worman’s Mill at age eight.

From an interview kindly given during August 2011.


"As the overall Monocacy region developed, paths used by the Indians and early traders became the roads used by settlers. … Frederick County itself … was not the initial destination. Instead, the first routes were headed elsewhere and were only of necessity passing through the area. … the Monocacy River … was not itself a river of travel. Instead, it was a River to be crossed. This is turn led to the practice of referring to all roads leading toward the Monocacy River or its general region as the “Monocacy Road.” … There was, in other words, no one Monocacy Road.” Tracey, p. 50. ¹ When we purchased our unit in Worman’s Mill Conservancy, the front pages of the printed distributed CC&Rs contained the following paragraph. This is what prompted me to investigate the history. “History: Jacob Stoner, a German settler to Frederick built the Mill Pond House on the site before the Revolutionary War, along the Old Annapolis Road, around 1746. When it was standing, it was a prime example of half-timber and wattle-and-daub construction typical of late medieval dwellings in the valley of the Upper Rhine in Germany. The Worman family purchased the mill in 1822. It is recorded that in 1863, Robert E. Lee’s confederate armies camped on the property during the Civil War.”